In Pennsylvania, the catfish does not get the respect it deserves. Many anglers regard catfish as junk fish. Some anglers are afraid to touch catfish.And, probably even more anglers have never tried eating catfish, believing it will taste like mud.

However, both Channel Catfish and Flathead Catfish prefer hard bottom habitat and clean water; these two catfish are not associated with low oxygen and soft mucky bottoms, as is the case for bullheads. A channel Catfish, when properly prepared, is every bit as tasty as a fried Crappie or Walleye. Furthermore, big Flathead Catfish are incredible fighters.

On the other hand, mature Flathead Catfish are an apex predator in several of our major rivers, searching out large preyfish including Rock Bass, Bluegill, large chubs and even smaller catfish species.

while not as popular among anglers as bass, Crappies trout or Walleyes, there are dedicated catfish anglers in Pennsylvania. Rod Bates became a dedicated catfish angler when the Pennsylvania Fish & Boat Commission closed bass fishing on the Susquehanna River during the spring of 2011. Bates, previously a Smallmouth Bass- only guides on the Susquehanna River, quickly discovered there were many anglers in Pennsylvania and neighboring states interested in fishing for catfish.

Flathead Catfish-- especially he bigger ones --- are solitary fish much of the year, holding in the deep pockets or the deepest part of a pool where logs and large rocks create a sanctuary of solitude. Flatfish Catfish usually come out only at night to feed. On the other hand, Channel Catfish tend to be schooling fish and feed throughout the day.

"I've discovered that Channel Catfish roam a lot in a river situation compared to Flathead Catfish," said Bates, "We catch Channel Catfish primarily in 2-to-4-feet of water over gravely bottoms. We start fishing for Channel Catfish in May and continue targeting them through the summer and early fall until water temperatures hits 46- degrees F."

"Being scavengers, Channel Catfish are readily caught on smelly bait," said Bates, "We use commercially -prepared paste bait referred to as 'fiber bait,' great smell and taste for Channel Catfish but without the mess of chicken guts."

In terms of tackle for Channel Catfish, Bates offers medium-heavy 7 foot bass rods with 17-pound test fluorocarben lines for all his clients. the rig consists of an egg sinker, sinker bumper, swivel and 2-foot leader with a #6 treble hook. Treble hooks hold the paste bait better than single hooks.

Generally, summertime fishing for Flathead Catfish is a nightmare gig, but Bates likes to focus on these catfish in October when they are schooling up for the winter and feed during the daytime. He stays on them until water temperature hits about 46-degrees F.

Although Flathead Catfish will eat just about any fish it can get its mouth around, Bates uses a 3-5-inch Bluegill, because Bluegills are easy to catch in nearby ponds.

Tackle for powerful Flathead Catfish gets an upgrade. Bates uses rod and reel combos specifically made for heavy duty catfish fishing. The reel is spooled with 50-pound test braid. Onto the line, he runs a sinker slide, sinker bumper and ties a swivel in place. The non-roll sinker on the slide varies based on current and depth. Two feet of 80-pound Dacron make up the leader, with a 7/0 J hook tied on the end.

Catfish fishing can be undertaken by boat and shore angler alike. When baits are positioned, it is a waiting game. Therefore, this type of fishing is best enjoyed as a group activity. Socializing makes the time between runs pass quickly. 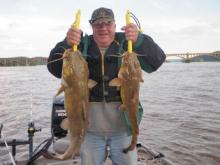 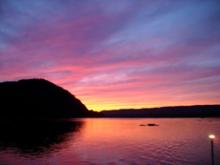 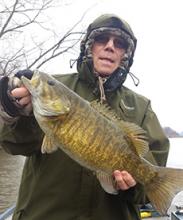 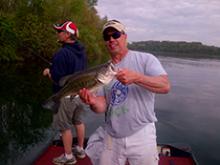 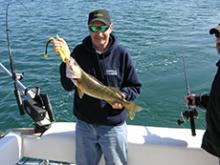 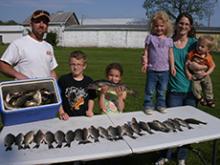 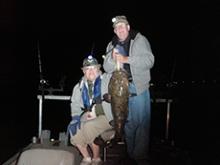 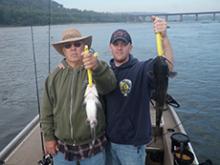 William with a quality Musky
END_OF_DOCUMENT_TOKEN_TO_BE_REPLACED